Soft tissue mineralisation, in which mineralisation occurs outside of the teeth and skeleton, is a complex process resulting from an imbalance between calcification propagators and inhibitors. Affecting almost every tissue in the body, it can lead to common and rare diseases with important morbidity and mortality. Common disorders include aging, atherosclerosis, chronic kidney disease and diabetes mellitus. Among the primary genetic mineralization diseases, pseudoxanthoma elasticum (PXE – OMIM# 264800) is considered a paradigm disorder.

PXE is an autosomal recessive, multisystemic disorder, primarily affecting the skin, the eyes and the cardiovascular system. The histopathological hallmark of PXE is ectopic mineralization and fragmentation of the elastic fibers in the extracellular matrix.

In 2000, the ABCC6 gene (chrom. 16q13.1) was identified as the defective gene in PXE. It encodes an ATP-dependent transmembrane transporter. The substrate of this transporter and its role in the pathogenesis of PXE remain to be elucidated. They are just a few of the many enigmas surrounding this fascinating disorder and soft tissue mineralisation as a whole.

In recent years, it became clear that PXE is not an isolated disease but rather is part of a spectrum of ectopic mineralization disorders. Among others, these include the PXE-like syndrome - characterized by generalised cutis laxa-like skin lesions and a deficiency of the vitamin K-dependent clotting factors -, PXE with pigmentary retinopathy and several overlapping phenotypes.

Together, this spectrum of disorders provide a unique opportunity to study the mechanisms underlying soft tissue mineralization. Gaining insights in its pathophysiology will not only improve our understanding of processes such as aging, but will also identify markers useful for precision medicine, for the management of patients and for therapy.

Soft tissue mineralisation (STM) can affect nearly every tissue in the human body. Hence, the number of phenotypes presenting with or resulting from STM is considerable. In this section, short summaries are given on the following topics:

These review papers give a state-of-the-art overview on the following topics:

This paper provides information on how the different phenotypes in the PXE-related spectrum can be distinguished on histology.

Soft tissue mineralisation is a complex process, the molecular and cellular mechanisms of which are not fully understood. Mineralisation is a balance between mineralisation propagators, and antagonists are important for physiological mineralisation. Although most soft tissues can undergo calcification, certain ones – including the skin, the kidneys, the cartilage and tendons, the eyes and vasculature – are considerably more prone. Pathologic mineralisation in one of these tissue types may result in disease, which can be very debilitating, painful and typically destructive for the compromised tissue.

The controlled deposition of calcium phosphate in the form of hydroxyapatite in the ECM plays an important role during growth and development as well as adult life, and it contributes to the mechanical stability of the skeleton and teeth (enamel) as well as calcium and phosphate storage. Though life without calcium is unthinkable, its high affinity with phosphate, and the tendency to form insoluble precipitates, make it a putative threat for cells and tissues. Uncontrolled, pathological or ectopic calcification is commonly found after tissue injury or as response to systemic mineral imbalance, and it can occur in every tissue. Deposition of calcium crystals or true bone formation in non-osseous soft tissue (or ectopic calcification/ossification) may occur as a result of one of the following three methods:

Regarding the initiation of and pathogenetic mechanisms underlying ectopic mineralization several hypotheses have been proposed (Figure 1):

These pathophysiological mechanisms are however not mutually exclusive and display significant crosstalk. 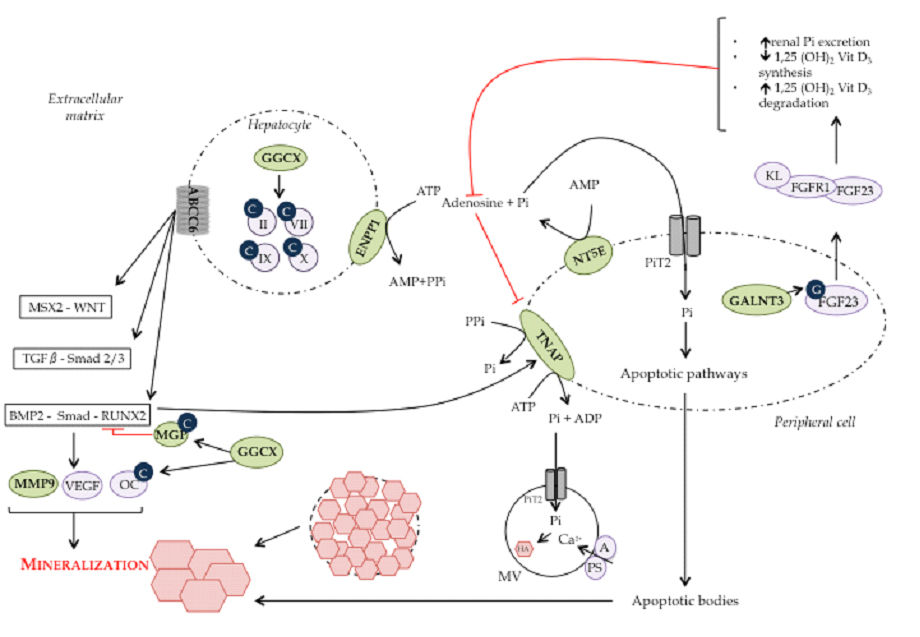 Pseudoxanthoma elasticum is an autosomal recessive systemic disorder, affecting the elastic fibres and characterized by abnormalities of the skin, the ocular and cardiovascular system.

The mean age of onset of PXE is 13 years. Most often, the cutaneous lesions are the first to be noted. These typically occur in the flexural areas of the body and are characterized by peau d’orange and yellowish papular lesions, often coalescing into plaques (Figure 1a-c). An increased laxity of the skin can sometimes be observed (Figure 1d-e). Additionally, mucosal lesions can be seen as yellow reticular patterns, most often at the inner lip (Figure 1f).

Funduscopical examination can reveal ruptures of the elastin-rich Bruch membrane, called angioid streaks (because of their resemblance with the retinal vessels) (Figure 1g). These make the fundus prone to subretinal neovascularisation and haemorrhage (Figure 1i), often leading to moderate or severe loss of central vision in the fourth or fifth decade of life. Peripheral vision usually remains unaffected. Additionally, a mottled aspect of the fundus, called peau d’orange, and subretinal calcifications (comets and comet tails; Figure 1h)) are typical characteristics of the PXE retinopathy and often precede angioid streak formation.

Gastro-intestinal haemorrhages are an infrequent but severe complication due to the fragility of the superficial gastric wall vessels.

PXE patients often tend to have additional sites of ectopic calcifications in abdominal organs and testicles (testicular microlithiasis). While the former do not seem to have major clinical relevance, the latter have been associated in literature with testicular cancer (although this association is not based on prospective data).

Although suggestions have been made in the literature, it is presently unclear whether carriers of one ABCC6 mutation (e.g. parents or offspring of a proband) have a slightly higher cardiovascular risk (particularly peripheral artery disease and stroke) compared to the general population. 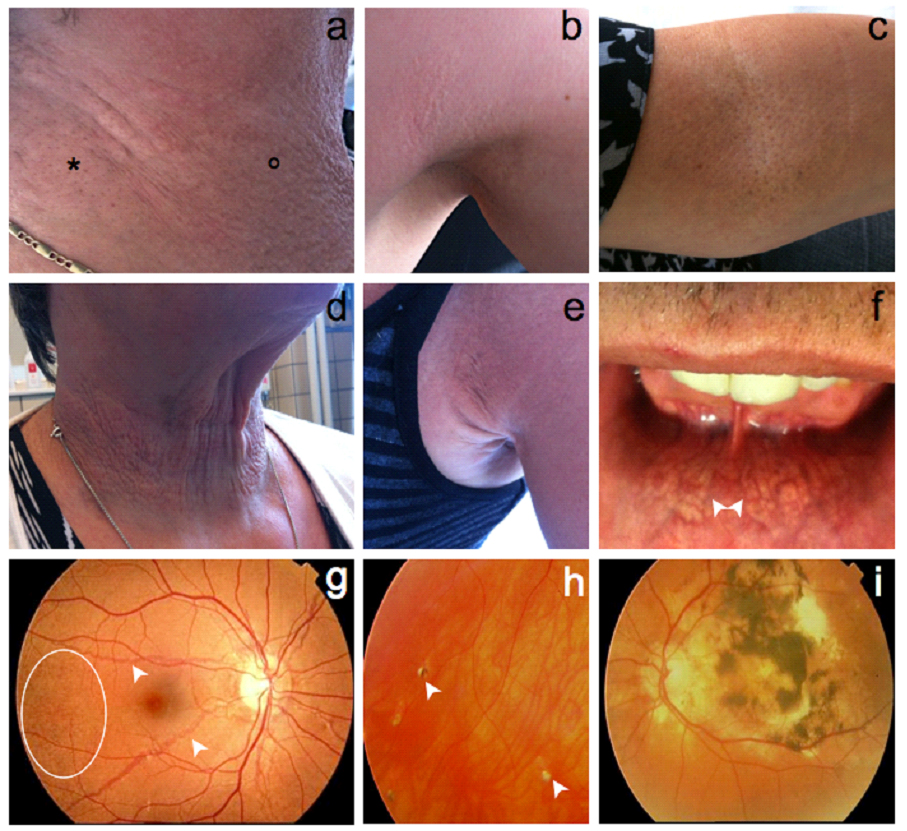 Figure 2: Clinical characteristics of pseudoxathoma elasticum. The first symptoms are mostly papular lesions (a, asterisk) often coalescing in plaques (a, circle; b) and peau d’orange aspect of the skin (c), increased skin laxity (d,e) and mucosal lesions (f). In fundo, perau d’orange (g, circle) and angioid streaks (g, arrows) can be noted. Other characteristics are comets and comet tails (h, arrows) and subretinal neovascularisation and hemorrhage (i).

The pathogenesis of PXE is still largely unknown. In 2000, the ABCC6 gene (ATP-binding Cassette C6) was identified as the defective gene in PXE. The gene sequence consists of 31 exons, spanning ~ 73 kb of DNA. ABCC6 encodes an ATP-dependent transmembrane transporter, the biological substrate of which is as yet unknown. Similarly, the relationship between aberrant ABCC6 activity and extracellular matrix changes in PXE (fragmentation and mineralization of elastic fibres) remains to be elucidated. ABCC6 is mostly found at the basolateral cell membrane in liver and kidneys and to a lesser extent in the tissues affected by PXE. Its cellular location suggests that ABCC6 transports a substrate important for connective tissue homeostasis into the blood, suggesting that PXE may be considered a metabolic disease.

More recently, mutations in ENPP1, encoding an ectonucleotidase and associated with a phenotype called Generalized Arterial Calcification of Infancy [LINK naar tekst GACi hieronder] were shown to cause PXE. ENPP1 is important in the metabolism of inorganic pyrophosphate or PPi, a potent calcification inhibitor of mineralization. In a single cohorte of PXE patients, low serum levels of PPi have been observed, suggesting involvement of PPi deficiency in the mineralization seen in PXE. The precise mechanism and importance however are under investigation.

The diagnosis of PXE is primarily made on clinical grounds following skin evaluation and funduscopy. A clinical diagnosis of PXE is traditionally confirmed by demonstrating fragmentation and calcification of the elastic fibres in the reticular dermis of a lesional skin biopsy, using van Giesson (elastin) and Von Kossa (calcium) staining methods. Although the elastolysis is characteristic, additional abnormal morphology or distribution of other extracellular matrix components (collagen, fibrillins, and proteoglycans) is also often observed.

Molecular analysis of the ABCC6 gene yields a high mutation detection rate and can therefore be used as an additional test or, in some clinically well defined cases, as alternative for skin biopsy. When normal, molecular analysis of the ENPP1 gene and GGCX gene can be useful, as mutations in these genes have been shown to cause PXE or a PXE-like phenotype.

Currently, there is no causal therapy for PXE. Plastic surgery for skin lesions usually does not yield good results and should be avoided, unless patients suffer functional complaints of e.g. excessive skin folds. For increased skin laxity, lipofilling of the skin may be successful. At an ophthalmological level, management is confined to regular self-testing using the Amsler test and annual follow-up with funduscopy to evaluate progression and possible neovascularisation. At present the latter can be treated using intra-ocular anti-VEGF (Vascular Endothelial Growth Factor) therapy, which will obliterate the novel vessels and thus minimize the risk for haemorrhage and subsequent vision loss.

Cardiovascular management consists of close follow-up of the traditional cardiovascular risk factors (smoking, weight, blood pressure, cholesterol). Additionally, regular ultrasounds of the heart and carotid/femoral arteries are advised. Because of the possible association with malignancy, control ultrasounds of testicular microlithiasis are regarded as useful. If abdominal calcifications are present, these are evaluated bi-annually to evaluate progression.

In 2007, Vanakker et al. first described a severe PXE-like phenotype, characterised by excessive leathery skin folds and a deficiency in vitamin K-dependent coagulation factors. Initially, the clinical features of the disorder are often hard to distinguish from the classic PXE (Figure 17) (Vanakker et al., 2007). Contrary to PXE, ophthalmological and cardiovascular manifestations in PXE-like patient remained mild, though a propensity toward cerebral artery aneurysm could not be excluded. Using LM, the overall appearance of the PXE-like dermis was identical to that of classic PXE, and reticular dermis presented areas in which elastic fibres were polymorphous, fragmented and mineralised. However, at the ultrastuctural level (using EM) elastic fibres of PXE-like patients had a more fragmented and mottled appearance compared to those typical of PXE. Moreover, very often mineralisation occupied only a limited area of the periphery of elastic fibres and was organised as electron-dense, crystal-like precipitates. Several collagen fibrils were also found to fuse to form collagen flowers. This disease is caused by loss-of-function mutations in the GGCX gene, encoding a gamma-carboxylase which in the liver is responsible for the activation of the VK-dependent coagulation factor. The biochemical and immunohistochemical features of PXE-like and PXE patients are summarised in Table 1 (Vanakker et al., 2006; Vanakker et al., 2010).

Patients with inherited haemoglobinopathies, most often thalassemia and sickle cell disease, may have elastic tissue changes and clinical features closely resembling PXE. The skin, eyes and cardiovascular symptoms are indistinguishable from PXE, except for their age at onset, which is usually later in life. The identical histological findings in patients with beta-thalassemia suggest that either a pathway is involved which is independent of ABCC6 or that the largely unknown ABCC6 pathway is affected further downstream (Hosen et al., 2010). As a result, haemoglobin electrophoresis should be considered in the standard workup of every patient presenting with clinical and/or histological features resembling PXE (Figure 21).

Figure 3: Clinical features of a patient with beta-thalassaemia and PXE lesions. A) The small papules on the lateral side of the neck are indistinguishable from hereditary PXE. B) Peau d’orange (asterisk) and C) angioid streaks can be seen as in classic PXE.

Generalised arterial calcification of infancy (GACI) is an AR disorder, characterised by severe calcification of internal elastic lamina in large- and medium-sized arteries and associated with intimal proliferation. This leads to arterial stenosis and heart failure within the first months of life and is associated with a poor prognosis (Figure 20). Although survival to adulthood has been reported, GACI has been often lethal in the first six months of life. Some patients may also develop hypophosphatemic rickets with hyperphosphaturia, a finding associated with improved survival beyond infancy in patients with GACI, which is caused by biallelic mutations in the ENPP1 gene encoding the ecto-nucleotide pyrophosphatase/phosphodiesterase 1. However, recent findings suggest that ABCC6 mutations account for a significant subset of GACI cases, and ENPP1 mutations can also be associated with PXE lesions. Based on the considerable overlap of GACI and PXE, both entities appear to reflect two ends of a clinical spectrum of ectopic calcification rather than two distinct disorders.